Why are Singaporeans choosing this over conventional clothes drying methods?

How do most Singaporeans dry wet laundry?

An introduction to clothes drying conventions in Singapore

In the all year sunny island of Singapore, air-drying of laundry is the most economical, low-cost and efficient way. This is why most Singaporeans opt to use the conventional way of hanging our laundry.

94.7% of the Singaporean population resides in high-rise buildings where approximately 78.7% of us live in HDB and about 16% in condominiums and apartments (Ong, 2021). With this, most of our laundry air-drying is literally done in the air, outside our windows.

Sticking poles out the window

Yes, sticking the poles out the window is the most common way! In the case of HDB flats, the old pole system which comes with pipe socket holders was invented in the 1960s. These are like flagpoles full of washed clothes and this sight is what most Singaporeans would have grown up with. 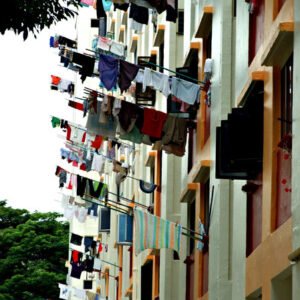 With modernisation and upgrading, the new pole system seen in newer or upgraded HDBs under current Home Improvement Programs (HIPs) are T-shaped racks that provide support on both ends of the laundry pole (The New Paper, 2020).

In 2020, under the extended HIP, a new ‘retractable’ rack with 6 stainless steel short poles “that can be extended and retracted within the frame of the rack for easy access” is introduced (Ng, 2020).

Drying indoors for the working households

Typical work duration of Singaporeans is approximately 40 to 45 hours per week and currently, 50% of employees are returning to the workplace (Hawksford, n.d.). 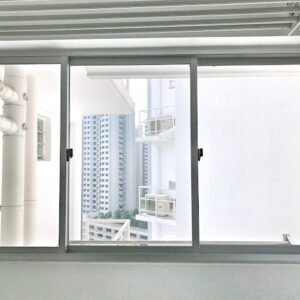 This means most of us are back to drying our laundry indoors with shut windows because the weather is unpredictable, and it just does not make sense to leave the windows open in case it starts pouring. We just cannot be too sure, even with the weather forecast!

What are the pros of our conventional clothes drying methods?

What are some problems we face when drying laundry in our conventional ways?

When lifting heavy poles full of wet/damp laundry out the window, the outwards and forwards motion coupled with the downward gravitational pull on the wet/damp laundry creates an outward thrust on the person docking the pole. There have been reports of this happening before and the risk of falling is definitely still there. In highrises with window grills drawn away to allow for the manoeuvring of poles, this is very relevant especially for those of us who struggle with acrophobia.

There is a proper way to lift heavy items to avoid back injuries. In essence, it boils down to good posture and keeping the item as close to the body as possible (University of North Carolina, 2021). But in the case of lifting poles of wet/damp laundry out the window, it is difficult to maintain these good practises. It is just a normal tendency to lean forward, lifting and dropping the load forward and outward, and most likely we find ourselves with an arched back (bad posture) when doing so. After a while, this starts creating a strain on the back and when prolonged, may cause sprains, strains, and other injuries which on some occasions can be lifelong (Advanced Consulting and Training Ltd., 2020). This is especially pertinent to those of us who are shorter and/or with lower upper body strength, particularly, more petite ladies and elderlies. 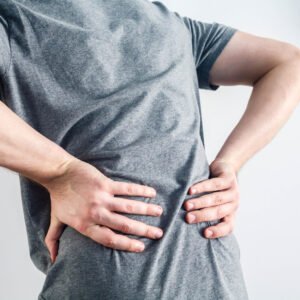 Most households now use washing machines to spin dry the laundry but it really only prevents dripping wet clothes. Each cycle extracts some water from the clothes which causes it to be damp instead of drenched. Damp clothes on bamboo poles still creates a substantial weight that we have to lift, in order to dock the poles into the pipe sockets or onto the T-racks.

An average person washes 4 to 5 loads of laundry a week (Pryatel, 2020) and this equates to an average of a heavy-lifting session once every 1.5 days.

Clothes and poles falling downstairs due to strong wind 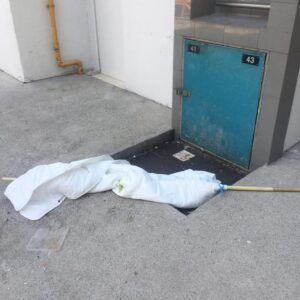 While the nice gusts of wind help speed up clothes-drying, they do increase the probability of clothes or even entire bamboo poles falling off (Yeo, 2016) and is especially relevant when we have to battle the wind while keeping poles of dried clothes. This is a very relevant risk for homes still using the old system. Even with the improved T-shaped racks, it does not solve the problem for short poles that cannot reach the other end of the T-rack (Yeo, 2016).

With the introduction of the new ‘retractable’ rack by HDB, sunning of laundry may be restricted to just a small batch of clothes as there are only 6 short poles (Ng, 2020). 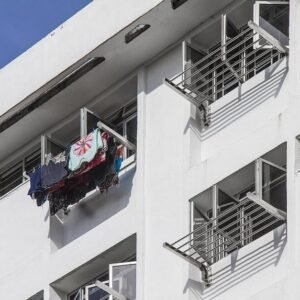 From 2015 to 2020, Singapore’s population ranges from 5.5 to 5.8 million (Wikipedia, 2021) while the bird population is estimated around 136,000 with 436 species (Worldometer, n.d.). With a healthy population of birds, particularly the Javan Mynas and Pigeons (Lim, 2020), it is not uncommon to find them perched on bamboo poles of laundry hung outside the windows. With perching, well, comes the inevitable defecation. 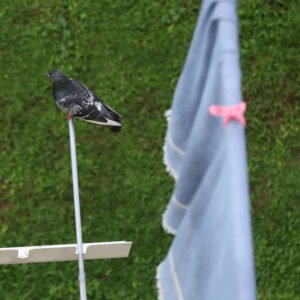 The Northeast Monsoon has a “wet phase” (December and January) and a “dry phase” (February and March). The wet phase’s Monsoon Surges cause widespread and continuous moderate to heavy rain as well as rapid development of afternoon and early evening showers. Generally,  higher rainfall are observed between November and January during the wet phase of Northeast Monsoon season. 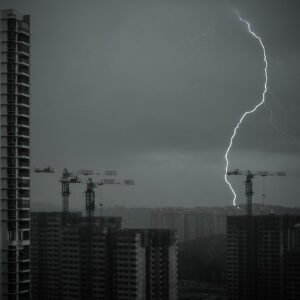 The Southwest Monsoon Season experiences showers and thunderstorm activity between predawn to midday. Short duration showers/thunderstorms in the afternoon are typical during this season as well. Occasional ‘Sumatra squalls’ will also occur between the predawn hours and midday during this period. Heavy rain generally persists for 1-2 hours, followed by cloudy conditions and light rain until afternoon.

Separating the Northeast and Southwest Monsoons is the inter-monsoon period (Late March-May and October-November), which sees thunderstorms, at times severe, in the afternoon and early evening.

Based on climate records, November has the highest rain days. With reference to the Meteorological Service Singapore (MSS), Singapore receives 2165.9 mm of rainfall in an average year.

With rainy days in tow and sometimes continuing into a full week of rain during the monsoons and inter-monsoons, laundry typically takes longer to dry and that “damp” smell is unavoidable.

It is not a myth that the weather in our tropical island is difficult to predict and changes in that split second.

According to MSS, tropical weather is difficult to forecast as opposed to mid-latitude weather.

Unlike the mid-latitudes, the tropics have a relatively homogenous air mass and fairly uniform distribution of surface temperature and air pressure. Therefore local and mesoscale effects (e.g. sea breezes) are more dominant than synoptic (large-scale) influences, except for tropical cyclones”.

Strong convection and moist air in the tropics gives rise to frequent development of rain showers and heavy thunderstorms. These convective weather systems tend to develop and dissipate quickly, often within one or two hours. Also, as the prevailing winds in the tropics are generally light, predicting the movement of localised storms can be difficult. Their short lifespan and small size presents a forecasting challenge in terms of accuracy and lead time (MSS, n.d.).

Damp clothes hung indoors can easily absorb lingering smells such as smoke, food and ingredients odors. In addition, in enclosed small spaces, there is less area for moisture particles to disperse which condenses and causes humidity in a room. This is the beginning of that “damp” smell we get when drying clothes indoors. As clothes and towels take longer to dry, the smell situation is aggravated when mould and mildew grow from the wet fabric. So, the faster the clothes dry, the less likelihood of these mould spores growing and causing a full blown “damp” smell (Living, 2021).

HOMLÈDJ Automated Laundry Rack does not require us to lift any poles out the window, eliminating the safety risk of falling as well as clothes and poles falling down the building.

No more heavy lifting and back pain

HOMLÈDJ Automated Laundry Rack can be controlled with a button to move the rack up and down, without us having to lift any poles full of laundry. This means no more back pains, sprains and injuries.

HOMLÈDJ Automated Laundry Rack allows laundry to be hung and dried indoors. With the Fan and UV functions supporting weather-proof indoor drying, this means our laundry is no more at the mercy of the ever-changing weather and bird defecation while still enjoying the benefits of outdoor drying.

HOMLÈDJ Automated Laundry Rack is designed to accommodate the maximum amount of laundry in a space efficient layout so we can hang as many clothes in any snug or tight space.

HOMLÈDJ Automated Laundry Rack allows for usage flexibility with features such as extendable poles that can be tucked away or dropped down as needed, and hook holes are inbuilt to hold extra hangers or hooks for smaller clothing items.

With Singaporeans placing more emphasis on interior designs for new homes and even home rejuvenation projects, HOMLÈDJ Automated Laundry Rack designed to look modern, sleek and elegant is a great complement that blends into our home designs.

PSST! We are running a promotion now. Since you have stumbled upon our article, below is the link to HOMLÈDJ Automated Laundry Rack promo  #dontsaybojio #limitedtimeonly Save on Shipping when you buy more. Free Shipping for purchases *SGD$70 and above!

*May exclude some bulky items due to special delivery arrangements

We use cookies to ensure that we give you the best experience on our website. If you continue to use this site we will assume that you are happy with it.OkPrivacy policy